As winter turns to spring, steelhead resume migrating to their spawning grounds. River freshettes (where the water rises) and warmer water temperatures draw fish upstream and into smaller tributary streams. As steelhead get closer to their spawning grounds it becomes easier to spot them, both because of the smaller size of the river, and because they move into more predictable locations. Sight fishing for steelhead is an exciting experience. Instead of blindly fishing mile after mile of water you can actually see your quarry and how it reacts to your fly. Chances of success are greatly improved when you know the fish are present, and you can direct your cast to them. Team fishing, where one partner spots from a vantage point while the second partner fishes will help you hook-up. However, spotting steelhead takes practice and some stealth. Here are some tips on locating migrating steelhead in the river. 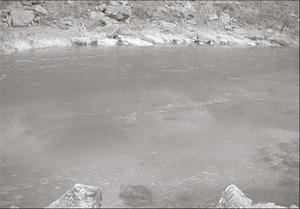 Can you spot the steelhead? There are at least 6 fish visible in this picture. When the steelhead are "in", this is a excellent spot in the early morning -- it is directly above a deep hole where fish hold, and it has the right type of gravel bottom. (SF Clearwater River, April 2007 Photos by Troy Pearse)

It is easiest to spot fish when the sun is out on the water and behind you. Find river banks where the sun is at your back. If possible, cross the river to get the sun behind you. Overhead sun is also good. Cloudy or no-sun situation makes it much more difficult to spot steelhead, unless you know exactly where to look. I like to cup my hands on each side of my eyes as side-shields while I look for fish--to keep out all light. Focus your viewing on the bottom of the river. Wait for windows of visibility to drift over the spot you are looking at. Make sure you are wearing polarized sunglasses--if you don't have them--THEN GO BUY SOME!! Attempting to spot steelhead without polarized glasses is very difficult. Photo-chromatic sunglasses, such as the copper Action Optics, are a good choice. These sunglasses are lightly tinted in low light conditions, such as are present in the morning/evening, and get darker in brighter daylight.

One of the keys to spotting steelhead in the spring is to identify the bottom gravel and structure where they like to hold. Once you find good holding locations, you will continue to find fish there--so keep good track of the spots where you find fish. Remember that in the spring steelhead are looking for spawning gravel. They will stop and hold at many different spots with spawning gravel, as they travel upstream. This is actually the key item in what makes it possible to spot steelhead in the spring. Spawning gravel is golf-ball or smaller sized gravel that is in one to four feet of water. It is typically located out of the main flow-- often near the shoreline. One thing I look for is gravel that has been "rubbed clean" by fish. This happens as the females rub their sides on the gravel. I don't know if they are building a redd, loosening their eggs, or just going through the early motions of spawning. But it creates a very distinctive change in gravel coloration that is a flashing neon sign that steelhead have been there. You may also spot fish in holding water, such as in front or behind a boulder. Steelhead prefer to swim upstream along the river shore, so boulders along the edge that breakup the river flow are a good place to look, so are tail-outs just above a rapid. Fish will rest in these areas after swimming up through the rapid. Spots above deep holding-water will fish well first thing in the morning, and again in the evening. Migrating steelhead will hold in the deeper water and then move out when the light is low on the water. Some spots that fish well in the mid-day will not fish well in the early morning because they aren't adjacent to holding water. Keep this in mind when you choose your first morning fishing spot. 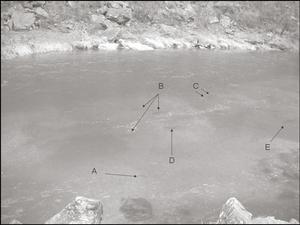 A: Definitely a rock. It's too small and not laying parallel with the current to be a steelhead.
B: FISH! FISH! FISH! These shapes are the right size, and they are laying parallel to the current.
C: A pair of steelhead laying next to each other, 1 slightly behind each other. Learn to look for this pattern.
D: Is it a rock, or is it a steelhead? It's hard to say from the photo. It's the right size and shape, but isn't lying parallel with the current. You would have to watch to see if it moves.
E: A steelhead laying in a gravel depression.

Don't look specifically for fish--but instead look for fishy-looking shapes. Watch for dark shapes, two to three feet long, which are parallel to the current. In the spring two or three steelhead will often travel together, so be looking for a pair of steelhead. Sometimes they will be side by side, but often the males will be holding just to the side and below the female. If a second male is present he will be holding below the female. You may see these males swim back and forth, jockeying for position with the female. Look for "fish parts", and not the whole fish. Some of the key shapes to look for are the fish's tail, the fish's head, the lateral red stripe, or the fish's red gill plate. Look for movement, such as the fish's tail moving slightly in the current, or the flash of a female rubbing on the bottom gravel. Movement can be a key, as it will catch your eye. If there is bright sun out, look for shadows in the river and then find what is casting the shadow. Sometimes you can see the fish shadow easier than the actual fish.

Once you've found a fish you have to be careful not to spook it. The fish are wary, and are often easily spooked because they are exposed to predators when in shallow water. Fish may spook if you cast your fly line over them-- shadows make them very nervous. Don't walk up to them from the side or from the front. If you are nymphing, stay behind them and to the side. If you are swinging your fly to them, be careful not to get too close, and stay as low as you can. If you do spook the fish you are casting to--don't give up! There are usually other fish holding very near, sometimes right below them in deeper water. Take a few minutes and look around, and even if you don't see more fish, make a few casts below the area where you spotted the first fish anyway. If you spot multiple fish then try and cast to the male first. The female will stay put while you hook and fight the male. But when you hook the female the male will follow her, and you will then have less chance of catching him.

Casting to visible steelhead is an exciting way to fish. But don't forget that these fish are preparing to spawn, or later in the season, are spawning. Be a responsible angler¡ªwade carefully and avoid walking through gravel that has been rubbed clean. Play and release the fish quickly, being especially careful with wild fish. Some anglers disapprove of fishing for steelhead as they near time to spawn. You may choose to fish to just the males (which are darker colored), or fish the water below the gravel spawning areas.

back to recent blogs

It's been awile since I last went steelhead fishing on the little salmon river in Idaho. I enjoyed your reading and the idea of stalking the fish. We use some of these techniques while we hunt are red fish while bow fishing. Our boat usually spooks them first though.