It was already 8pm by the time I finally had my pack strapped on at the trailhead. The sun was low in the sky and the air was brisk. The hike was going to take longer than the sun would light my path. As long as I was able to get close to my destination mountain lake before complete darkness, my headlamp could help me the rest of the way.

Any time fish are rising at a mountain lake, spirits rise. Whenever you fish a new place in the mountains, unless you have solid reports from someone else who has fished the place recently, you never really know if you're going to find fish or not. The sub-alpine weather, short growing season, and lack of rich insect life in mountain lakes make life difficult. So when I arrived at the lake and saw occasional splashy disturbances in the lake's silvery-blue reflection of the dusk sky, my hopes for the weekend's fishing rose.

It was warm by 8 a.m. Saturday morning when I finally climbed out of my tent. I was greeted to a haze over the lake that rivaled winter fog. It was difficult to see a few hundred yards to the far side of the lake, and the surrounding mountain ridges were hardly discernable from the smoke-filled sky. A controlled wildfire a few mountain ranges to the south was producing smoke and smell that had me thinking barbeque at 8 in the morning.

Fish were splashing unabashedly all over the western end of the lake. At first, I thought the fish were rising to caddisflies on the water's surface. After watching the water for awhile, I realized all the caddisflies were actually small, #16 cream-colored moths. And there were lots of them stranded on the surface. Occasionally they would struggle to free their wings, sending out concentric wavelets like a beacon to any nearby fish. The fluttering action worked to both attract and repel trout from the insect. As the trout swam in search of food, the surface commotion would attract them from a distance. The fish would excitedly charge towards the surface to inspect the prey. Then surprisingly, maybe 50% of the time, the trout would break off their rise within a foot or so of the surface. While the struggling movements drew trout to the vicinity, it also put some trout off once they got close enough to the moth.

I wasn't anticipating a moth hatch and consequently had no moth patterns. I tried an Elk Hair Caddis, a small Simulator, and a CDC adult caddis, but only very rarely did I convince a trout that my imitation was food. The moths were trapped in the surface with their wings spread out. My guess is their thin wings glowed white from the penetrating sun when viewed from underneath. My Elk Hair Caddis and CDC adult caddis had a vastly different profile from the spent moths, and did not produce the same glow.

After struggling with the caddis patterns, I decided to try a couple of my favorite subsurface tactics despite the continual rises of the trout: the sinking leech and the Hang and Bob.

My first technique was to fish an olive-brown bead-head California Leech to trout cruising the shoreline. My favorite way to fish the leech is to cast it ahead of cruising trout, timing the cast so that the fly sinks right in front of the passing fish. I have found that once the trout has spotted the leech, it is imperative to let it sink motionlessly. Some trout will aggressively swim faster up to the fly to take it - others, if the sink is timed perfectly, will simply continue swimming leisurely along their path, barely opening their mouth as they take the leech in passing. The key to this method is being able to watch the trout and the fly; when the fish opens and closes its mouth, or you see the fly disappear, set the hook! Trout are quite good at taking in foreign objects, tasting them, and spitting them back out. If you wait to feel tension on the line from the trout taking the fly, you may not feel anything at all. This method requires three important points: trout must be close enough to shore to spot; there must be little to no wind to disturb the water's surface (which negatively affects the ability to see trout); and the angler must observe a fair amount of stealth to not spook passing fish.

Once I switched to the sinking leech from my surface presentations, I immediately had success, including a nice 18" cutthroat trout that went on a fantastic run to the middle of the lake after taking my fly. I also netted a handful of fish in the 14" to 16" range - a great size for most sub-alpine lakes. Occasionally with the sinking leech, my excitement for an interested trout would get the best of me and I'd twitch the fly or start retrieving it when the fish got close. In all instances, this resulted in me not catching the fish. Sometimes the trout would get excited at the moving fly and follow it momentarily, but never would they take the fly. In fact, I had several instances where the trout saw the sinking leech as it swam by, then a few feet later the trout made a loop, came back and took the still-sinking fly. Those instances required great patience to not move the fly as the trout swam by.

The Hang and Bob 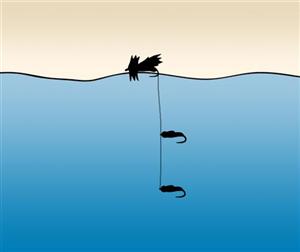 Diagram of the Hang and Bob

In the afternoon, the wind picked up enough on the lake to ripple the surface and make it difficult to spot cruising fish from a distance. Without being able to accurately see the take of a passing fish when it gobbles up a sinking leech, the sinking leech technique becomes nearly worthless. To counter this, I switched to a technique that uses the small surface waves to my advantage: the Hang and Bob. The Hang and Bob is basically bobber fishing for fly anglers. It consists of a short leader connected to a bobber, strike indicator, or large dry fly. Tippet is then attached to the indicator so that it hangs down straight into the water. Bead-head flies are then tied to the tippet at 2'-3' intervals, so that multiple flies are fished at different depths at the same time.

For my afternoon fishing, I tied on a #10 Stimulator as my bobber, then attached tippet to the bend of the hook and tied on a #12 bead-head Pheasant Tail about 2' down. I attached another section of tippet to the eye of the Pheasant Tail and tied on a #12 bead-head Gold-Ribbed Hare's Ear about 2' below the Pheasant Tail. The key with the Hang and Bob is to cast the setup in a path where fish cruise, since the flies don't move after being cast. For mountain lakes, trout often cruise in a consistent path within 10'-15' of shore, so most of my casts were quite short.

After casting, I simply enjoyed the afternoon warmth and watched the Stimulator bob up and down in the waves. The waves made the Stimulator move up and down on the water, which in turn caused the two nymphs attached to it to slowly bob up and down directly below the Stimulator. This is where the technique gets its name. The nymphs, slowly undulating in the same spot, do a great job at triggering strikes from cruising fish.

I usually didn't have to wait too long before the Stimulator disappeared and a trout was on one of the two nymphs. The Gold-Ribbed Hare's Ear performed exceptionally well, yielding several rainbows and cutthroats in the 14" - 16" range and a couple beauties at 18". My guess is the Hare's Ear performed better because it was the deeper of the two flies, and more fish were cruising at 4' deep rather than 2' deep.

Sunday morning I hiked to a close-by lake where there were fewer, but larger trout than I had been catching the previous day. The fish were rising sporadically to the spent moths, but I instead focused immediately on fishing a sinking leech. The water was perfectly clear and the banks surrounding the lake were high and steep, making it easy to spot cruising fish. The leech started off with 4 hits on 4 fish, but I was only able to hook and land one of the fish. The wind picked up earlier in the day than it did Saturday, and soon it was nearly impossible to spot fish. I switched to the Hang and Bob and hooked a beautiful 18" cutthroat that took me to my backing! Fantastic. I was able to pick up a few more nice fish before finally calling it a weekend. I headed back to camp, took down camp, packed out, and was greeted with a flat front tire. That's all right, changing a flat tire is an easy price to pay for a great weekend of fishing.

Sub-alpine Flower
back to recent blogs

Simply an outstanding article! You have an excellent feel for high country trout.

You said the trout must be close enough to shore to spot. I wonder if someday they will have an iPhone app that would help with this. Maybe you take a picture and then the app could locate the fish. This way it would make it easier on both of us. Thank you for the great article!